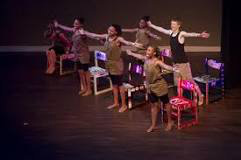 For more than two decades, Moving In The Spirit has served the Atlanta community with high-quality dance programs that educate, inspire and unite young people while helping them to become compassionate leaders. Moving in the Spirit began in 1986 with a small class at Stewart Avenue Shelter and today the organization offers 26 weekly classes to over 250 children. Young people leave their programs with confidence in themselves as artists and leaders, poised for possibility in making the world a better place.

In 2015, Moving in the Spirit launched its Space to Soar Capital Campaign to raise $7.5 million to move from its home space “The Beam” on the campus of FCS Urban Ministries to the new Edgewood MARTA station Transit Oriented Development site.  With a successful campaign, Moving In The Spirit will be poised to celebrate its 30th anniversary in 2017 by serving twice as many youth and hosting other local and national artists in the new space.

Moving in the Spirit has been recognized locally by the Community Foundation for Greater Atlanta with the Managing for Excellence Award and received the Governor’s Award for Arts and Humanities, while also performing at the White House and receiving the Youth Program Award from the President’s Committee on the Arts and Humanities