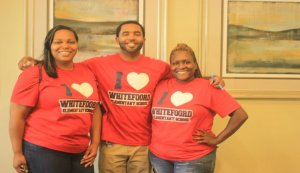 In 1995, after the Foundation made its first investment in the Edgewood neighborhood with the school based clinic at Whitefoord Elementary, it consulted with Families First to develop a community based organization that could serve children, youth and families and the Whitefoord Community Program was born.

Over the next two decades, Families First grew as an organization and it now serves over 37,000 children, women and families in metro Atlanta with a mission to ensure the success of children in jeopardy by empowering families.

When the Foundation developed affordable housing in the Edgewood neighborhood in 2011-12, known as the Retreat at Edgewood – it engaged Families First to support the new residents as they adjusted to their new homes and new community. As it celebrates its 125th anniversary in 2015, Families First is proving that “children should never come last” by engaging deeper with families in the communities where they live, work and thrive. To learn more about Families First, please visit http://www.familiesfirst.org/